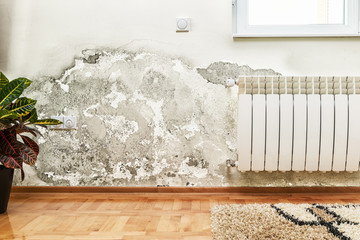 Over the past few weeks, sporadic developments of mold on South Campus have raised concerns among the freshmen class with whispers that a mold situation like the one last fall could be on the rise. Marie Schauder, Director for Housing and Operations, and Alice Lenthe, Director of Environmental Health and Safety, assure students this is not the case.

“We have had sporadic cases,” Schauder said when asked what the severity of the development this year has been. “There’s a couple of contributing factors. One, it has been really focused in one building, which is our building, Stanford. You have a couple things, maybe more about cleaning out units, like the window units and filters, but not like something you wouldn’t expect. Just normal maintenance types of things.”

Last year, the University experienced a campus-wide issue with mold, a severe level that had not been seen in well over two decades. Mold was reported to be growing from air conditioning units in individual rooms in Caughlin Hall, Stanford Hall, Good Counsel Hall, Moriarty Hall, Sullivan Hall, Sheehan Hall, Austin Hall and Fedigan Hall. Although the mold situation was the big news on campus last fall, Robert Morro, Vice President for Facilities Management, reported that “less than 15% of dorm rooms on campus” were affected by it. In Morro’s 16 years in the maintenance department at the University, he commented that he has never seen a mold issue like that at the University.

Tom DeMarco, Dean of Students and Assistant Vice President for Residence Life spoke about the weather issue at hand last autumn. “As of September, we have had twice the amount of annual rainfall in the Philadelphia region, and we still have three months to go,” he said in an interview last year.

DeMarco and Morro both emphasized the issue of the humid and rainy weather that affected the individual air conditioning units in each room. Water is the stimulant in creating a suitable environment for mold growth.

“The weather was horrendous last year,” Schauder commented. “We’ve been lucky because while it has been humid, I think our days have been more balanced.” The Philadelphia region has experienced relatively warmer and drier than this time last year, leading students to wonder why some cases of mold have made a reappearance.

“Every year, there are a couple cases here and there” mentioned Lenthe. “Last year it was cool and humid, which is the worst set of circumstances for the kind of HVAC units we have. This year it has not been humid. It has not been cool either. It has pretty much been warm and dry, which is perfect weather.”

Schauder explained that this summer, the University spent time assessing rooms in each building and making upgrades wherever necessary. Many new heating, ventilation, and air conditioning (HVAC) units were upgraded in order to halt any mold related issues that could have been caused by old ones.

“We did assessments. We looked at contributing factors within the mechanics of the buildings, and if we found anything like that, we found a lot of time this summer making those necessary upgrades. Upgrades in Good Counsel were necessary. We have the HVAC units in Stanford as well,” said Schauder.

She continued, “We took a look at our smaller buildings, such as the four ones down here (South Campus). We went through all the apartments before upperclassmen moved in to make again to make sure if there were any issues they were resolved. Anything that came up we took care of. In this building, Stanford, we have identified one issue, and it’s a contributing factor to some of the cases we’ve had in the building, but it’s not the only factor. We really want to help students.”

Lenthe expounded on the numerous factors that could contribute to any mold growth in a dormitory or living space.

Placing a refrigerator and microwave in front of the HVAC system could drastically alter the functionality of the unit. The heat from the refrigerating unit blows onto the thermostat of the air conditioning, causing it to run more than it should. When an HVAC system runs too much, condensation is created, which drips and after a while creates mold.

Lenthe emphasized that placing a refrigerator and microwave in front of the heating and cooling unit is essentially “the worst place to put it.”

Before students moved in this summer, the Office of Residence Life took preventative measures with dorm rooms on Main and South Campus.

“This year before students moved in, we configured the rooms and so that it left the space for open flow for the HVAC systems to work properly, and the other thing we offered is that if students had too much stuff, too many belongings, if the students wanted to have one or both of the desks removed to give them more space, we did that to help them,” Schauder said. “We’re trying to be creative as well knowing the amount of belongings student bring from home, and we’re trying to be realistic.”

The University additionally left information on every HVAC unit upon move in to remind students how the systems work and to not block them with furniture. Schauder referenced videos on Residence Life’s website that provide aid to students on how to utilize the HVAC units properly. “For freshmen parents, we sent an email as part of the preparation before they arrived, talking about the units,” Lenthe added.

Stanford residents received an email from the University last week regarding the intermittent mold cases but also provided students with tips to preventing mold in the living spaces.

The University highlighted the following preventative measures to students: do not open windows while the units are operating, keep air conditioning on at all times, do not block the units with furniture, do not place potted plants or any other sources of moisture on or around the units, do not leave wet items underneath beds, empty trash on a regular basis, and promptly clean up any spills.

The University encourages all students to report anything they believe to be mold immediately to Facilities Management.

“We have always had cases here and there of mold,” Lenthe said. “I think we’ve had more cases this year of people who might see some dust and think it is mold when it’s not, but that’s fine. We do encourage people to report, and then we’ll go and look at it to see what it is, which is very smart. That’s the right way to do it. We want people to report.”

According to Residence Life, Maintenance and the Office of Environmental Health and Safety, this year is really no different than any other year at the University in terms of mold, with the exception of last fall. Schauder stressed, “We’re working on it. We’re educating students, and I think that’s the important thing.”