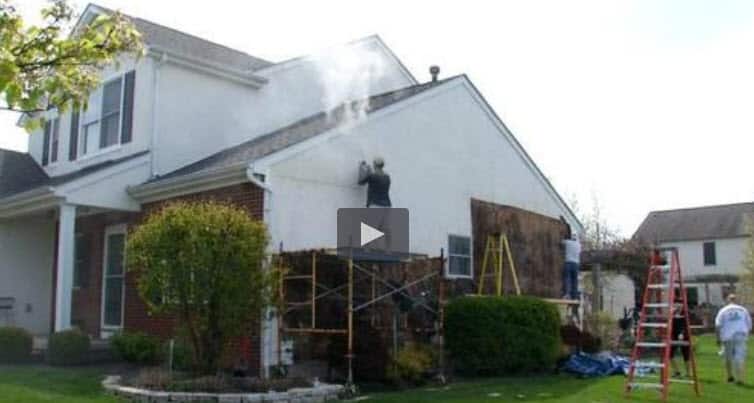 For decades a home has stood as a prized possession but behind the stucco of a Hilliard home is a dark problem. Mold and rotting wood was so widespread the Adams family says it forced them out.

They bought the home three years ago and say an inspector found no signs of issues. It, like many in the neighborhood, was built in 2003 by Dominion Homes. Emails from the builder reveal the one year warranty on the stucco and the two-year warranty against water intrusion had expired before the Adams moved in.

“I was shocked and I’m still in shock,” Jimmy Adams said. “Kind of unbelievable having your 3-year-old sit there and tell you, I love my house, I miss my house.”

The Adams’ insurance company hired an engineer who concluded the mold was the result of leaks in the stucco wall system. The report says the stucco is too thin, the windows had no flashing and the building paper wasn’t put on right, allowing water to run right in.

Karin Cash has decades of experience in construction and the insurance industry, even teaching a class on construction defects at Columbus State.

“On any given day, any contractor can have a major mistake,” Karin Cash said. “At some point when does the builder get to say, I’m done? I don’t know that 12 years is unreasonable.”

Anthony Simpson and his wife built a Dominion Home in Blacklick, Ohio, in 2004. Little did they know, they too would be dealing with a similar problem.

“It was initially a shock and hard to believe that it was actually happening to our house,” Anthony Simpson said. “Staggering amounts of mold.”

Another engineer, hired by the Simpsons, concluded a lack of an air and moisture barrier caused water damage and mold in the walls. The investigation even uncovered a drywall nail shot through electrical wires, melting plastic and burning insulation.

The Simpsons says they lived in a hotel for three months and are now paying of a $30,000 fix.

“I don’t know that I’ll ever build another house,” Simpson said.

Dominion Homes says it covers homeowners with a 30-year structural warranty but that only protects against load-bearing parts like beams and trusses. The Simpsons were offered no fix unless they could prove a structural problem.

Roy Auddino is living with the mold growing on and around the windows of his Dominion home. He says he noticed cracking and stucco issues a year after the home was built in 2003. Auddino says Dominion fixed the stucco on four homes on his street, including his, but says the mold came back.

“It eats me up, I lose sleep over it,” Roy Auddino said. “I’m paying for a home that’s contaminated with mold and it’s only 12 years old.”

ABC 6 Investigators called Kirk Ferchert of Remedial Solution, a highly BBB rated mold expert who tests for toxic air. Step one, is taking a sample of the outside air, then doing an inspection and air samples inside from the top of the house to the basement.

The lab report exposes high levels of mold in certain parts of the house. His fix is to seal off the affected rooms and eliminate the mold.

“You shouldn’t have to come home and be scared,” Kirk Ferchert said.

However, it can be costly as many homeowners have learned. Dominion Homes stopped using traditional stucco.

Dominion Homes responded to ABC 6 Investigators saying:
“We continue to employ our long-standing practice of thoroughly evaluating each homeowner’s individually presented concerns for consideration under their applicable warranties in relation to the age of the home, the nature of the claim, and the contractual agreements and warranties between the parties. It is also important to note that all homes do require both periodic and ongoing maintenance and that the need for a home repair of any type does not automatically imply any defect in the construction of the home.”

For families like the Adams, they say an estimated $75,000 in repairs means they will soon walk away. Homeowners are now discussing a possible class action lawsuit as other neighbors fear what could be hidden in their walls right now.

Tips to protect you and your home include researching home construction companies, finding a reliable home inspector with a reliable record, knowing the common flaws found in homes built during certain decades and asking questions.